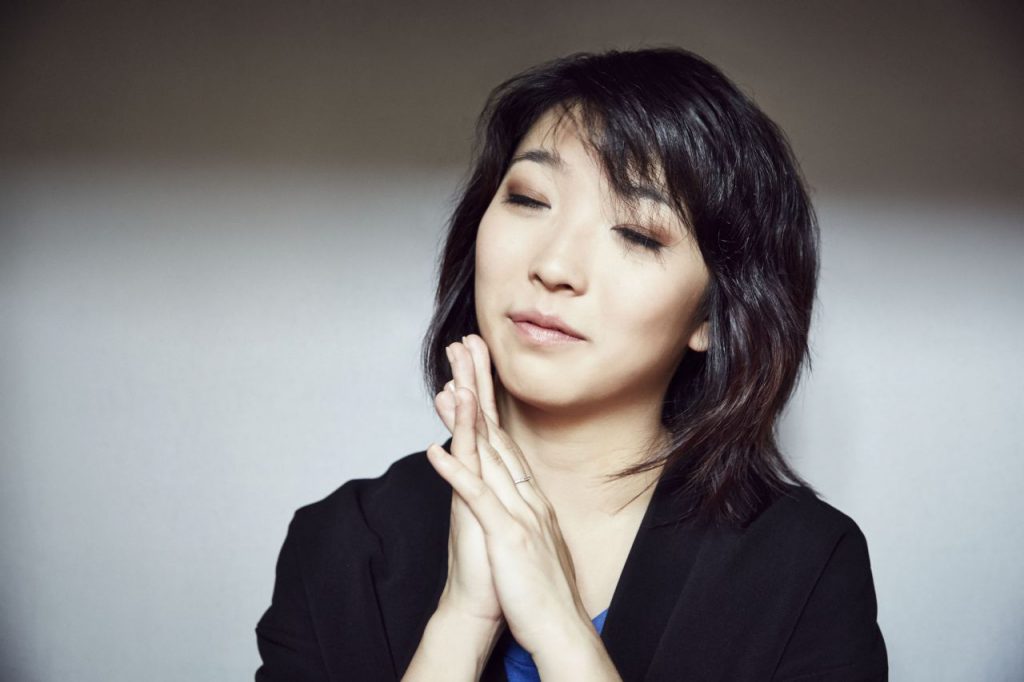 Two years ago, when I attended my first performance at the International Keyboard Institute and Festival, I spoke with a fellow attendee. The recital we were about to see was one of the last in the series, and she had made a point to attend every one. Looking back, which performer was her favorite? Her answer was Claire Huangci. On the second day of this year’s festival, Claire Huangci showed an abundance of the skill, style and emotion that made her an audience favorite in 2016. These also helped her win the Jury Discretionary Award at the 2013 Cliburn, first prize at last month’s Concours Géza Anda competition in Zurich, and all our hearts in her recordings and in the professionally produced videos featuring her, which can be found online.

Wearing on her right wrist her signature style of sparkling bangly bracelets, she proceeded headlong through the Scarlatti sonatas, even outpacing some of the precision that can be found on her recordings of these sonatas, but conveying all of the effervescence. (Her jeweler must also be a musician, because her bracelets, though eye-catching, kinetic and seemingly rigid, were silent.)

Though she is young, Ms. Huangci’s performance of the Shubert sonata was very mature. But what does that mean? Schubert’s final works are often described as mature, but Schubert died a young man. He wrote this sonata after attending the funeral of Beethoven, whom he revered, and likely with knowledge of his own impending death by disease at age thirty one. In Swann’s Way, the title character attends the performance of a work by his favorite composer and feels pangs of sympathy—how this master must have suffered to have been able to compose a work such as this! When I write that her performance was mature, I mean that in my maturing mind, like Swann I could sense the creator’s anguish. And how can a scherzo written by a composer in such an emotional state be played with lightheartedness? It may require a young person to come up with the answer, and Ms. Huangci revealed it. If in the Scarlatti Ms. Huangci’s tempi seemed hurried and did not elevate my grasp of the music, a brisk tempo in the Rondo movement of the Schubert was thoroughly enlightening and brought the work to a very satisfying and hopeful culmination.

During intermission, wanting to place myself under the full force of the Yamaha grand, I moved from the left side and found a seat in the center. This proved beneficial, because in addition to an even better sound spectrum, there was no distraction from bracelets, and a better vista of Ms. Huangci’s facial expression during the Chopin. Her Chopin preludes were breathtaking. What a study in contrasts these twenty-four pieces are! Some are so short and simple—the A major and E minor come to mind—that their notes can be learned by a student just past beginner level; but when played by a talented performer in a concert hall, they bring with them the full force of complex emotion. In reality, the emotion of the few simpler preludes is amplified by being sandwiched between the majority, which are longer and pose technical and emotional challenges that only the most advanced player is capable of surmounting. As I listened and began to scribble notes, I jotted remarks such as “Gmaj incredibly well articulated in the left hand,” but soon I was noting “lovely,” “LOVELY,” and by the C-sharp minor began to panic that by paying too much attention to my notes I was letting the performance slip by without my full emotional presence. So I set down my notepad and gave myself over to the experience. If I had written notes, many would have said, “I finally understand it!” because, intoxicated with the playing, I became like the high person who believes he gets the meaning of life.

For an encore, she played Debussy’s L’isle joyeuse and gave a glimpse into a profoundly unexpected dimension of her talent. I must hear her play more Debussy.

Claire Huangci has set a high bar for the host of luminary and rising pianists who are scheduled to follow her in the upcoming fortnight of piano recitals at Hunter College. Indeed, she had set a high bar for herself. Of the four Scarlatti works in her program, you can find at least two of them in online videos, and all can be heard on her masterfully played and recorded 2-CD set from 2015. And you can view her performance of the Schubert sonata at the Concours Géza Anda. To see video of her performance of the Preludes and of L’isle joyeuse, we will have to wait until the IKIF posts the video of this recital, and it will be an impatient wait for me.