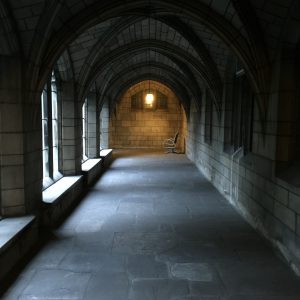 Corridor near the entrance to the crypt, Church of the Intercession

The choice of venue of last night’s performance was at once a stroke of genius and in hindsight obvious, so perfect was the combination of concepts brought into focus during its brief interval, in the crypt of the Church of the Intercession in Sugar Hill. The event showcased the talents of Christina and Michelle Naughton, the twin sisters performing Olivier Messiaen’s Visions de l’Amen for two pianos, in their final appearance in their planned 2015-2016 season.

Before composing Visions in 1942 and 1943 while his early thirties, Messiaen suffered the deaths of his mother, two uncles and a brother; conscription; capture and imprisonment; his country’s military occupation with its persecution and deportation of Jews to extermination camps; and the start of his wife’s descent into depression, mental illness and eventual institutionalization and early death. Though in many of Messiaen’s early works, including Visions, grief takes a prominent role, he nevertheless considered himself to be a composer of joy, most probably inspired by his abiding Catholic faith and with an eye to the afterlife, but also taking courage and motivation from the progress of mankind through science, from the songs of birds, the Westminster chimes pealing from free Britain in Radio Londres, and the zeal of his students, especially the talented and beautiful Yvonne Loriod, by whom he intended the duet Visions to be premiered along with himself. Having been named chief organist at Paris’s Église de la Sainte-Trinité in his early twenties, how could Messiaen not have approved of a performance of Visions in a church, even (or especially) in a church crypt once used as a mortuary? By marvelous happenstance, the church is only a short walk from the site of the last home of John James Audubon. Messiaen made study and transcription of birdsong, and its integration into his musical works, one of his enduring legacies, reflecting Audubon’s contribution in prior decades through his painting and writings. So justly does Messiaen’s legacy deserve to be linked with Audubon’s that in 1997, the Atlantic published an article on Messiaen titled, “An Audubon in Sound.” 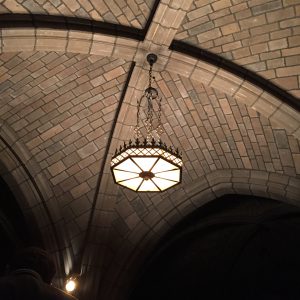 Vaulted ceiling in the crypt, Church of the Intercession

At dusk, at bottom of a long stone stairway to below ground level, in the crypt with its elegant vaulted ceilings, we gathered in two groups, in view of each other and of opposite sides of each piano, lidless and interlocking, at the epicenter. Christina, dressed in red and responsible for the secondo role, sat at the piano facing the staircase. Michelle, dressed in black, her back to the stairs and the corner of her piano not two paces from my seat, sat opposite for the primo. I estimated the sisters were over one whole pace closer to each other than when they normally perform on two pianos, the instruments in use tonight not being the longest of the Yamaha line but ideal for the intimate venue. In front of me, past Michelle and the audience on the opposite side, was a large candelabrum illuminating a stained-glass window. Behind our side of the audience, in burial niches installed in two walls, rested the cremated remains of scores of souls who met their ends when the building was home to the Trinity Church. Thus was the stage set when the sisters started playing the first movement of seven, “Amen of Creation.”

Many of the patterns and assumptions, ingrained in my mind from repeated listening to the Naughtons’ wonderful recording of this work on their most recent album, were jarred loose. Surrounded by masonry walls and ceilings, the sisters were able to project sounds out of these instruments that were astonishingly variable in tone. During the quietest passages we could hear sounds from outdoors both human-made (this being Manhattan) and natural, even the muffled sound of crickets (this being northern Manhattan surrounded by a cemetery, in August). And the most fortissimo were at volumes at which I had never thought to listen with headphones, because until this experience, it would have seemed beyond realistic.

Christina, having her due in the secondo role, gave a fresh spin on the rhythms the in second movement, “Amen of Stars and of the Ringed Planet,” which starts with an extended solo by the secondo. Some passages that I had assumed were played by one sister were actually played by both, such as the passage at the start of the third movement, “Amen of the Agony of Jesus,” described by Messiaen in the original program notes as “the curse of the Father on the sin of the world;” these measures are played in a rapid badminton volley between the two players. 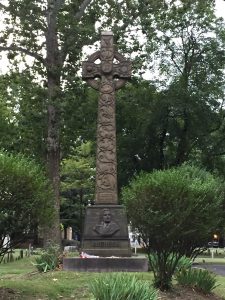 Tomb of John James Audubon, in the cemetery surrounding the Church of the Intercession

My favorite movement is the fifth, “Amen of Angels, Saints, Birdsong,” into which Messiaen wrote the true melodies of four species. Michelle’s portrayal of these songs was so vivid and lovely—and thereby so moving—for me especially in the reprise following the dramatic glissando and pounding discord dividing the movement nearly in two, that I tempered my emotional response lest I emit sobs or tears that might have attracted attention from the other side or from (no, no) the performers! She had brought birds to the indoor gravesites of those who wished their remains to have shelter from the elements but not necessarily separation from the sounds of nature. Since we had perceived sound traveling through walls, I felt certain that Michelle’s songbird voices flew up the stairs and made their way into the ears of any nighttime visitor to the bird-decorated gravesite of John Audubon, located outside in the cemetery, not far from the crypt door.

Another reality check was that the piercing treble staccato chords throughout the sixth movement, “Amen of Judgement” (set that night at an up-tempo but letting no one off the hook) are played not by one performer, as I had thought, but by both, in perfect unison. Aha, it was not a recording trick.

When the joyous, rousing and super-demanding seventh movement, “Amen of Consummation,” Messiaen’s depiction of paradise, had ended, on the final, crashing A-major chord, my emotional state was so fulfilled that I could not imagine an encore. However, I was unable to stop clapping, and so was everyone else, until Michelle and Christina returned to the keyboard, this time together on Christina’s piano. They performed Gottes Zeit ist die allerbeste Zeit, which Bach wrote specifically for performance in a church, to bring comfort to the believers among the bereaved by reminding them that the departed’s time is now spent in the domain of the Eternal. But that is a very long time.

Do players so young, so full of mental energy and physical power, with no peak in sight of the arc of their careers, ever wonder how long life will be on this earth? We will have to find this out through listening to their music, but I pray that it is a very long time.

The four birds Messiaen wrote into the score of Visions de l’Amen and painted by John Audubon during his travels in France. From left: finch, nightingale, blackbird, warbler.

If you have enjoyed this review, please consider making a donation to the Church of the Intercession, which hosted this event at their crypt.

Photo credits at the Church of the Intercession: Traci Levy

Thanks to Nicole Rudolph for background on early 20th-century French religious trends.