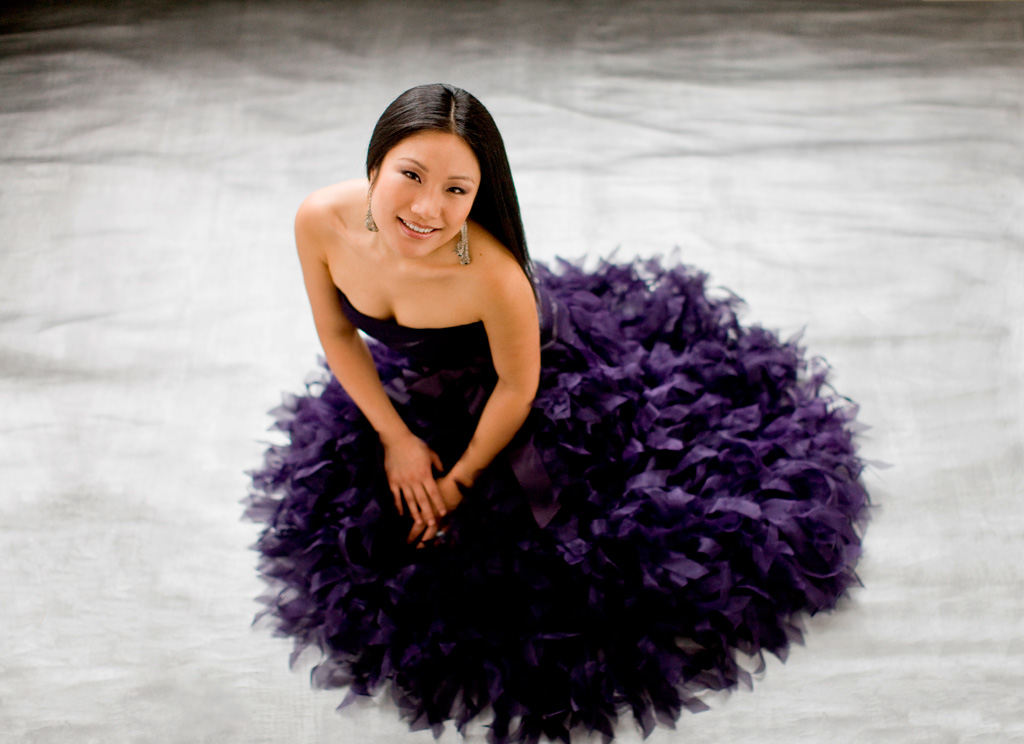 When Leopold Godowsky wrote of his sensational Berlin debut in 1900, he noted that every pianist and piano instructor in the city was in attendance. So it must be in New York, for a performer at the International Keyboard Institute and Festival, a yearly two-week-long feast of classical keyboard musicianship and education held at Hunter College. This night, the penultimate to feature headlining performers at the Kaye Playhouse, Xiayin Wang pleased immensely both pianistic elite and ordinary classical music lover alike.

Pianist and scholar David Dubal, with IKIF headliner Alexander Kobrin, presented a pre-concert program discussion with musical illustrations played by Mr. Kobrin. With Mr. Dubal’s words fresh in our minds, our ears were on the hunt for the musical depictions to come, as Ms. Wang appeared on stage with her long black hair down and her slate-gray gown nearly flowing over painted toes peeking through golden slingback sandals.

The Beethoven “Hunt” sonata was both a bracing and heartening introduction to the program. Ms. Wang set an eager tempo to the Allegro and Scherzo movements. She played the Minuetto in a serene and relaxed rhythm, disavowing a fixation on velocity while disproving the notion that this sonata lacks a slow movement. In the Presto, the chase was on. And whose perspective was depicted? As the movement unfolded and I began to visualize exhilarated pursuers, I noticed Ms. Wang’s foot had shed its golden sandal and was pedaling bare. Was this a show of allegiance not to the spur-shod huntsmen but to the velvet-pawed vulpine quarry?

At the hands of Ms. Wang, this spark—of perspectives and personalities in contrast—flickered, ignited and exploded throughout the program, not least with the next offering, the world premiere of Richard Danielpour’s Bagatelles. On the printed program, the Schumann had been scheduled for next in the order and Bagatelles third, following the intermission; but at the start of the concert a swap was announced. To the audience, this held the advantage of affording a few moments for reflection following the hearing of a striking, new composition. With Mr. Danielpour in attendance, Ms. Wang revealed the first Bagatelle with a searching and serene feel. Following were movements alternating between raucous and tranquil, insistent and reassuring, and containing contrasting emotions warring in the same movement. The effect was thoroughly modern, including enticements to all listeners (not only the pianists in the audience) with melody and tonality, and an abundance of excitement and of love. The final Bagatelle was my favorite, with echoes of the introduction to Mahler’s 9th symphony, but unlike with Mahler we had a complete movement in which to savor the euphoric sensation brought on by Mr. Danielpour’s lovely descending motive. The force of reason, through loving persistence, emerged victorious. What an honor if I am the first reviewer of a public performance of Bagatelles! Please listen to a recording of this piece if it becomes available, especially if performed by Xiayin Wang, but even if by an artist not in such close collaboration with the composer.

An attendee arriving after the intermission (and the program announcement), might be forgiven for hearing Fantasiestücke and taking it for Bagatelles, so closely in structure do the Schumann and Danielpour works align. The general audience aside, to the reviewer, the program switch added a challenge of tracing the conflicting-personality spark back 179 years to Fantasiestücke, the clear precursor to Bagatelles by its similar structure, as underscored by the pieces’ side-by-side inclusion in the program.

In preparation for the concert, I have been listening intently to recordings of the Fantasiestücke in order to take in the performance with an informed ear, and to set a course at last toward a love of the works of Robert Schumann. Ms. Wang gave my progress along this course a vigorous and heartfelt shove. Schumann wrote this work as an illustration and personification of his conflicting emotions, which he named Eusebius and Florestan, the former embodying his thoughtful and spiritual side and the latter the passionate and lascivious. Writing at age 27, he dedicated the work to a beautiful 18-year-old piano student to whom he would later become engaged, before ending their relationship abruptly. Eusebius took the first turn, with Ms. Wang’s gorgeous rendition of Des Abends (In the Evening), a lovely and tranquil introduction. Following was the voice of the passionate Florestan in Aufschwung (Soaring, an “upward swing”). Eusebius, the eventual victor, returned in the nick of time, just as I was again noticing Ms. Wang’s bared foot, she having left her sandals backstage at the intermission.

Bare feet were most appropriate for the start of Ravel’s Gaspard de la Nuit with the first movement named after and depicting Ondine (Wavelline), the water nymph who (as David Dubal had primed us), on being spurned in love by a mortal, sprays everything in sight as she departs with malicious laughter. How vividly did Xiayin Wang portray the playful mists and angry jets that Ravel wrote in the score! Ms. Wang then proceeded with the second movement, Le Gibet (Gallows), with its fateful bells tolling the turning corpse, reddened by the setting sun. With that imagery, accented by bright red toenails, Ms. Wang bade us turn away from the gallows and led us to the place, termed by Mr. Dubal the climax, the “red badge” of impressionistic piano virtuosity, the home of the demonic Scarbo. It was a thrill to see Scarbo played live, proof that a mortal human truly is capable of summoning the demon lying in this score. Under the control of Ms. Wang, Scarbo was terrifying to the audience, but not so terrifying to Ms. Wang, as she proved by gently touching her nose during a particularly hair-raising right-hand run—how can any recording capture such a moment? As Scarbo finally flickered and met his precipitous and twinkling end, our hands erupted in tumultuous applause for Ms. Wang.

The audience insisting on an encore, Ms. Wang played Oblivion by Clint Edwards, a romantic piece that seemed to have been composed to sing with lyrics, except during its wild and exciting middle section.

All being made well in the world, if only for a few hours, my own feet were floating just a bit as I made my way from the hall toward home, with reverberations in my mind of the beautiful and commanding performance of Xiayin Wang.