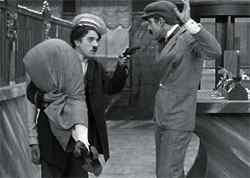 This Chaplin program focuses on his second year in films at Essanay. Not content to have his screen character be a figure of fun, today’s bill of HIS NEW JOB (’15), BY THE SEA (’15), THE BANK (’15), and POLICE (’16), illustrates Charlie’s development into a comic underdog, hero, and lover. Chaplin’s inspiration and hard work produced films that remain fresh and funny for audiences of all ages.