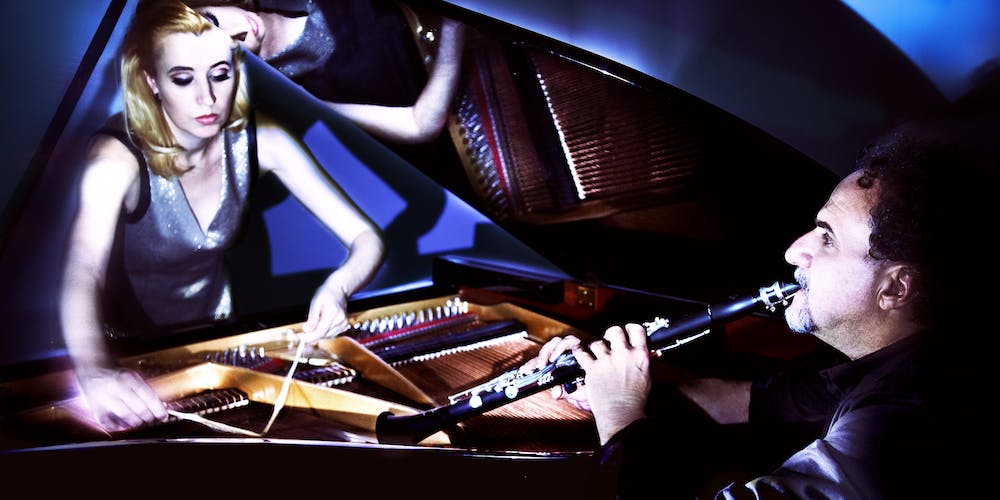 About DAVID KRAKAUER:
​Only a select few artists have the ability to convey their message to the back row, to galvanize an audience with a visceral power that connects on a universal level. David Krakauer is such an artist. Widely considered one of the greatest clarinetists on the planet, he has been praised internationally as a key innovator in modern klezmer as well as a major voice in classical music. In 2015 he received a Grammy nomination in the Chamber music/small ensemble category as soloist with the conductorless orchestra “​A Far Cry​”, and a Juno nomination for the CD “​Akoka​” with cellist Matt Haimovitz.

For the past decade Krakauer has emerged as an electrifying symphonic soloist who brings his singular sound and powerful approach to the concert stage. He has appeared with the world’s finest orchestras including the Amsterdam Sinfonietta, Baltimore Symphony, Brooklyn Philharmonic, Detroit Symphony, the Weimar Staatskapelle, the Orchestre de Lyon, the Phoenix Symphony, the Dresdener Philharmonie, and the Seattle Symphony.

Highlights of Krakauer’s lauded career include performances with the Kronos, Emerson, Tokyo, Orion and Miro String Quartets; performing during the inaugural season of Carnegie Hall’s Zankel Hall with renowned jazz pianist Uri Caine; an eight-year tenure with the Naumburg Award-winning Aspen Wind Quintet; tours and recordings with Abraham Inc which he co-leads with Socalled and Fred Wesley and performing in the International Emmy Award-winning BBC documentary ​Holocaust, A Music Memorial from Auschwitz​.

​​Krakauer’s discography contains some of the most important clarinet recordings of recent decades. Among them are ​The Dreams and Prayers of Isaac the Blind​ (Osvaldo Golijov and the Kronos Quartet/Nonesuch) received the ​Diapason D’Or in France​. ​The Twelve Tribes​ (Label Bleu) which was designated album of the year in the jazz category for the ​Preis der Deutschen Schallplattenkritik, ​and Paul Moravec’s Pulitzer Prize winning composition ​Tempest Fantasy​ (Naxos). He has also recorded with violinist Itzhak Perlman/ the Klezmatics (Angel) and Dawn Upshaw/ Osvaldo Golijov (Deutsche Gramophon). His unique sound can be heard in Danny Elfman’s score for the Ang Lee film ​Taking Woodstock​ and throughout Sally Potter’s ​The Tango Lesson​. New releases include his 2015 album ​Checkpoint​ with his band Ancestral Groove (Label Bleu), Paul Moravec’s Clarinet Concerto with The Boston Modern Orchestra Project (BMOP sound) and ​The Big Picture​ on his own label, Table Pounding Records in 2014.

An esteemed educator, David Krakauer is on the clarinet and chamber music faculties of the Manhattan School of Music, the Mannes College of Music (New School), The Bard Conservatory and NYU.
https://www.davidkrakauer.com/

About KATHLEEN TAG:
Kathleen Tagg is a South African pianist, composer and producer based in New York since 2001. A 2014 South African Music Awards nominee for best classical album, she has performed on four continents with a host of leading musicians, and the breadth of her collaborations defines her multi-faceted career.

She has performed at Carnegie Hall, Lincoln Center, 92n​ d​ St Y and Symphony Space in New York, but is equally at home in non conventional spaces and theater. Her performances and numerous recordings range from classical to world music, musical theater to her own music mixing improvisation with fully realized scores. She holds the Helen Cohn Award as outstanding doctoral graduate of the Manhattan School of Music, as well as degrees from Mannes College and the University of Cape Town. She was on the faculty of SongFest at Colburn in Los Angeles from 2014-16. She has performed throughout North America, Europe, Southern Africa, China and India and her recordings have been featured in film and television. Recent recordings include the songs of Jake Heggie with soprano Regina Zona (NAXOS, 2014) and ​Where Worlds Collide​ (Table Pounding Records, 2016) with South African jazz pianist Andre Petersen. Her latest recording, ​Breath & Hammer​ with clarinetist David Krakauer will be released this season. As a team, Krakauer and Tagg have created an evening-length work, ​Keepers of the Flame,​ for the Borderlands Foundation in Sejny, Poland, as well as performing their ​Breath & Hammer​ project and genre-crossing concert programs on four continents. Her work was performed and commissioned by the Cape Philharmonic Orchestra, New Century Chamber Orchestra and the Jewish Culturefest Vienna. Her musical, ​Erika’s Wall,​ co-written with Sophie Jaff, received a developmental production by The Music Theater Company of Chicago. She was a 2014-2015 fellow of the Dramatist Guild of America and 2017 Con Ed Exploring the Metropolis Composer in Residence.This season includes a newly designed show with David Krakauer and video designer Jesse Gilbert for the Boulez Saal in Berlin and performances at the National Gallery in D.C., the Nasher Museum in Dallas and a month-long residency at WITS University in Johannesburg.
​www.kathleentagg.com

IMPORTANT NOTICE:
This concert has limited seating available (First Come First Sit!). If you need to be able to sit, please kindly send us a message so we can reserve a chair for you.  Also keep in mind that the event is taking place in a “shoe-free zone”. Choose your socks wisely!

About Piano on Park:
Piano on Park offers an intimate and refreshing way to experience live music. The house concert series was launched when pianist Cyrus von Hochstetter opened his doors to host regular performances by soloists, chamber ensembles and small bands of all musical styles and colors. The venue enables a direct and unhindered exchange between performers and public, resulting in a unique and impactful musical experience.